One year ago today, we woke up to a neighbor banging on our door – to putrid, toxic smoke pouring into every window, to a bright orange sky well before sunrise, to fear and chaos and countless messages from concerned loved ones texting me “are you guys okay??” – and I didn’t write back for hours because I had no idea.  We were okay, we were safe, our neighborhood was actually probably the safest place to be in Santa Rosa (since we live well south of where the fires were, around the corner from the police & fire station on one side, the fairgrounds where the National Guard and thousands of firefighters were stationed, AND the vet’s building where everyone was being evacuated TO).  But we didn’t know that for awhile – we woke up to being told “the city is burning, be ready to evacuate” – woke up to a 5am panic attack, not realizing that most of our friends had been awake much of the night, listening to the terrifying news of fire after fire sprouting up in the dry, wind-blown night, and preparing their most beloved and urgent belongings for evacuation – woke up to a frightened child that I tried to reassure and rush to get ready at the same time – 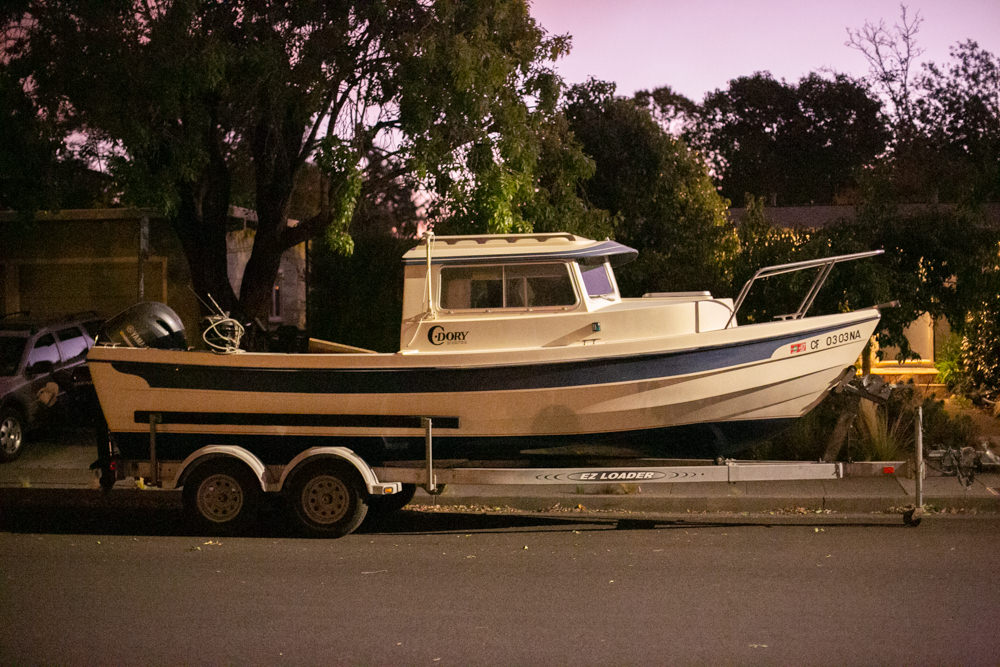 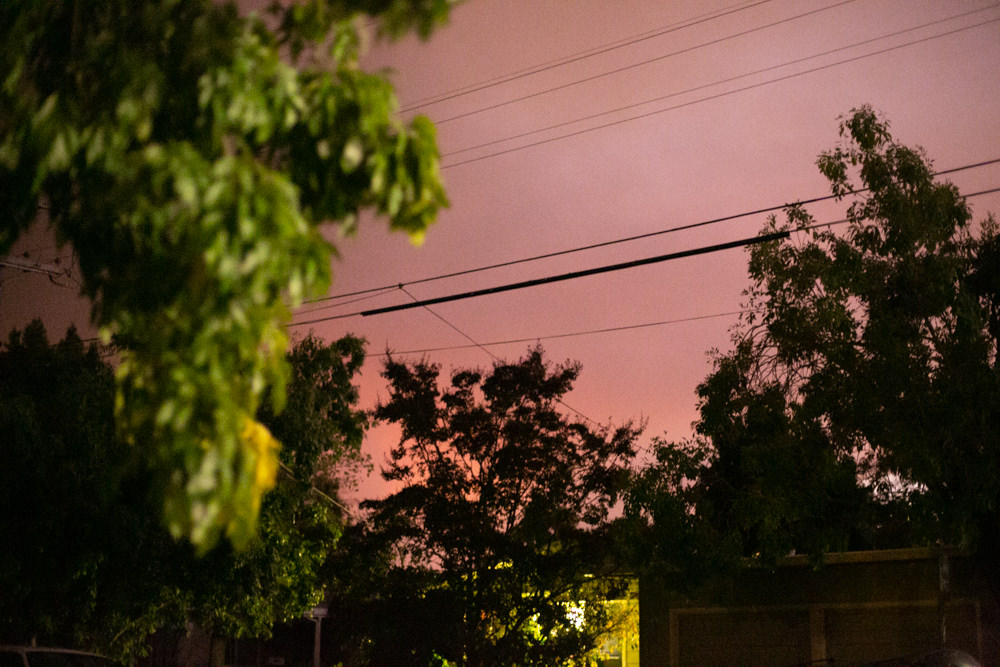 After walking around the house in an anxious fog where I couldn’t think, didn’t know what to do, basically just walked in circles for an hour, it finally became clear that our house wasn’t in any immediate danger.  And that if our neighborhood WAS to burn, it would mean that our city of over 160,000 people was totally gone.  Even though that seemed extremely unlikely, anything felt possible, in a way that rarely happens in our cozy suburban lives.  (Ultimately, over 2,000 homes in our city burned, with entire neighborhoods flattened by a quick-moving firestorm that sounded like a freight train to those that survived it – but our neighborhood was blessedly untouched) 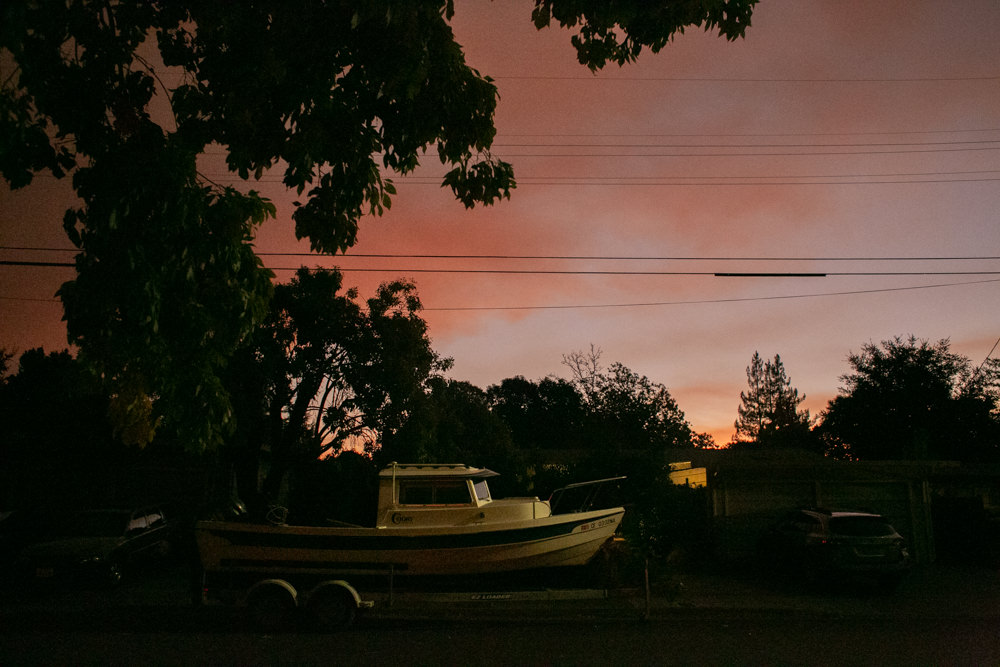 Symphony has asthma, and we wanted to try to get out of the smoke, so I packed up my computers, cameras, and hard drives, and drove ~20 miles south to my parents’ house in Petaluma.  What normally takes 20 minutes took about an hour, as everyone in Santa Rosa tried to escape the smoke and fear, too.  Unfortunately, the smoke seemed to mostly follow us, so we shut all of the doors and windows and blasted the air purifier.  But outside, the light was weirdly warm and diffused, with shadows that seemed confused, in a way that echoed the eclipses we’ve had in recent years. 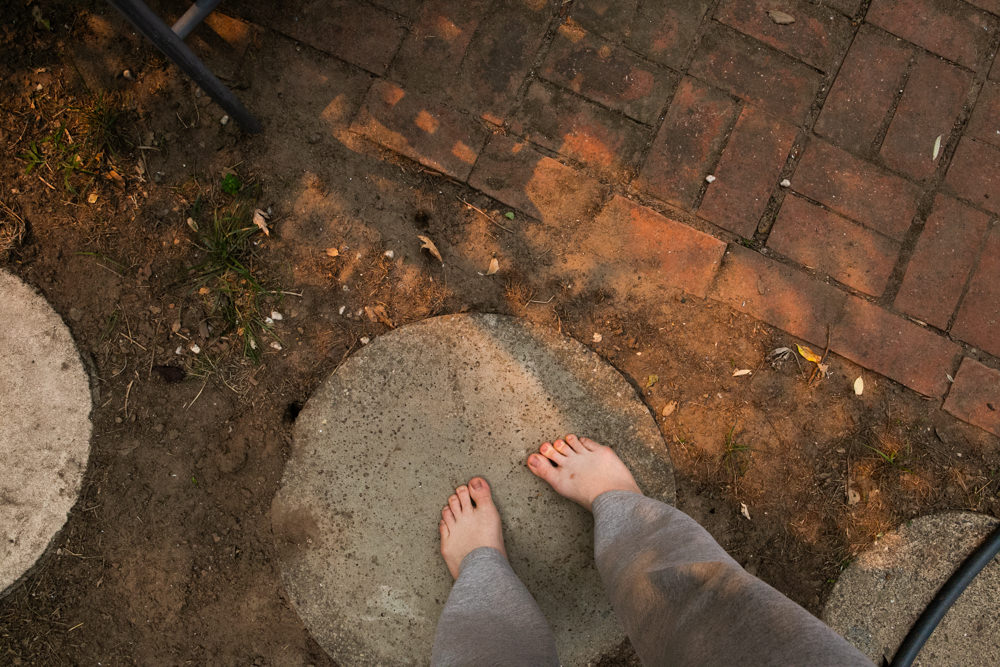 My parents’ garden is very beautiful all of the time, but looked exceptionally weird and mystical with smoke laying heavily in the Petaluma valley, desiccated sunflowers standing sentinel over the fence, beautiful pops of flowery color in the gray, close air, and even frogs hiding their delicate skins under pillows. 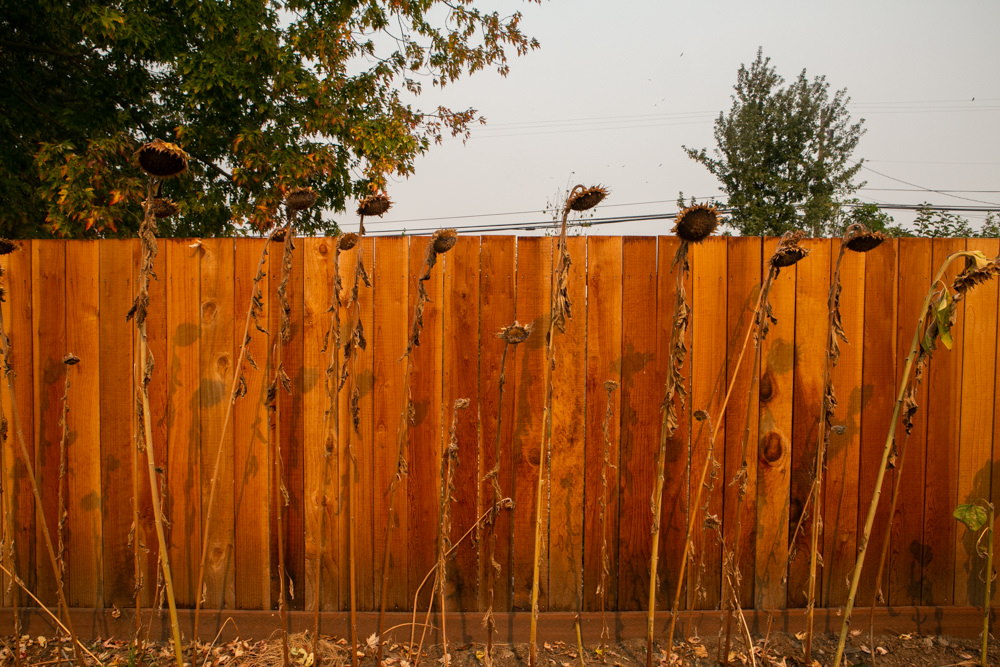 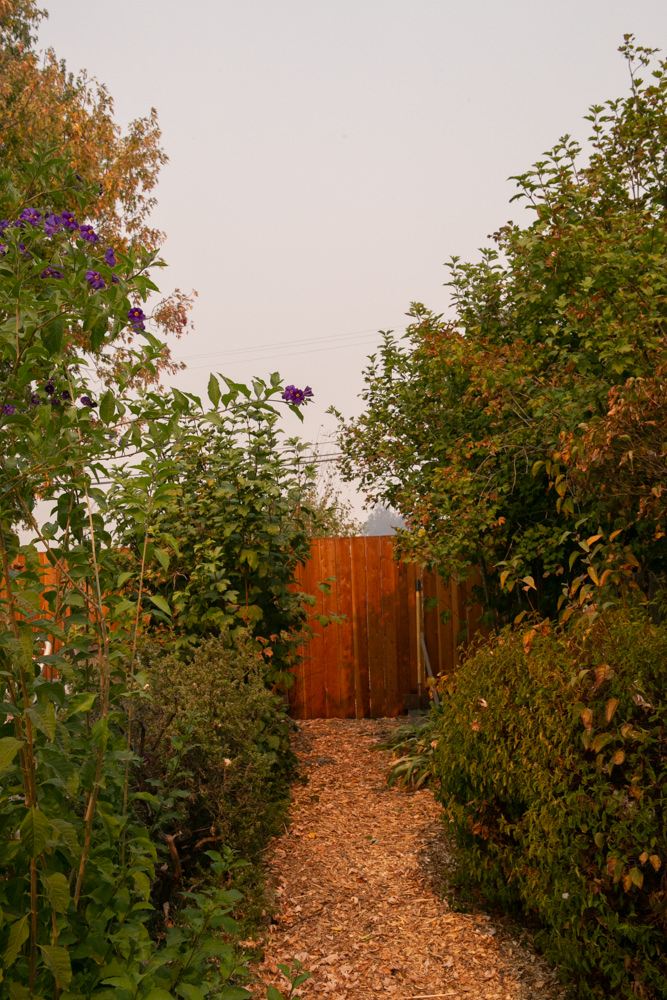 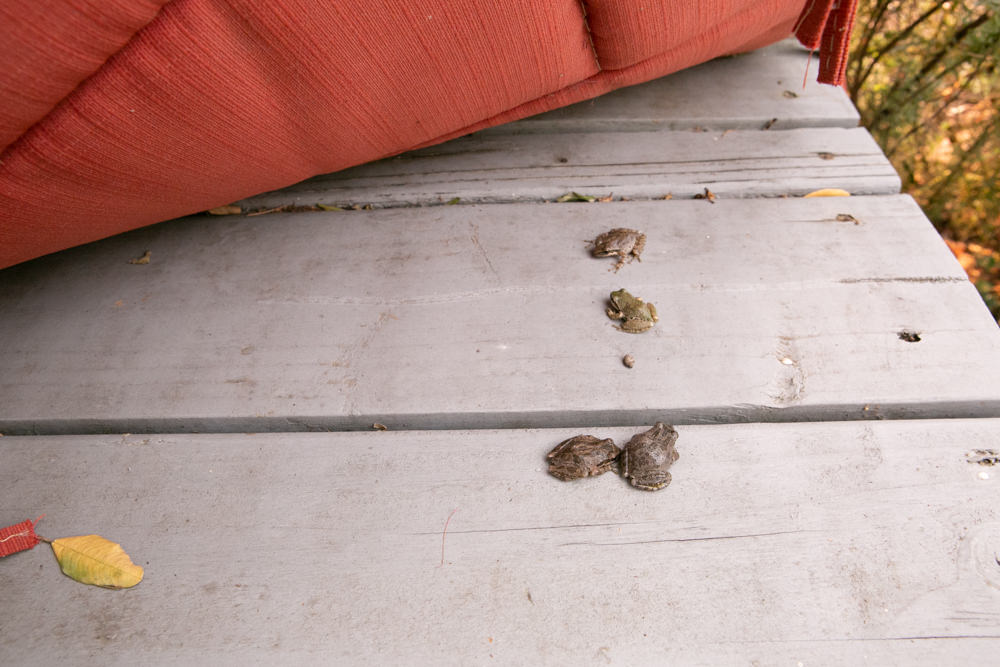 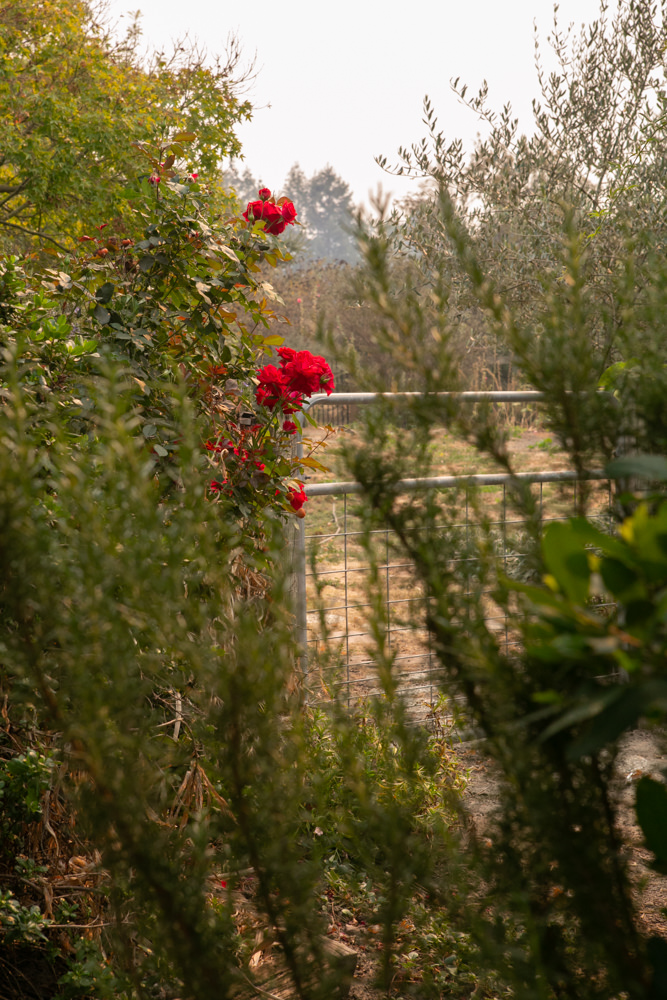 It was probably weird for me to go out and wander in the smokey-aired garden for awhile, but I also found it very calming and soothing to take pictures.  That’s what I do when I need to wrap my head around something, when I need to focus on the immediate and clear moment, and when I need to find a way of framing a part of life that feels overwhelming.   I take pictures (all the better if it’s of flowers!). 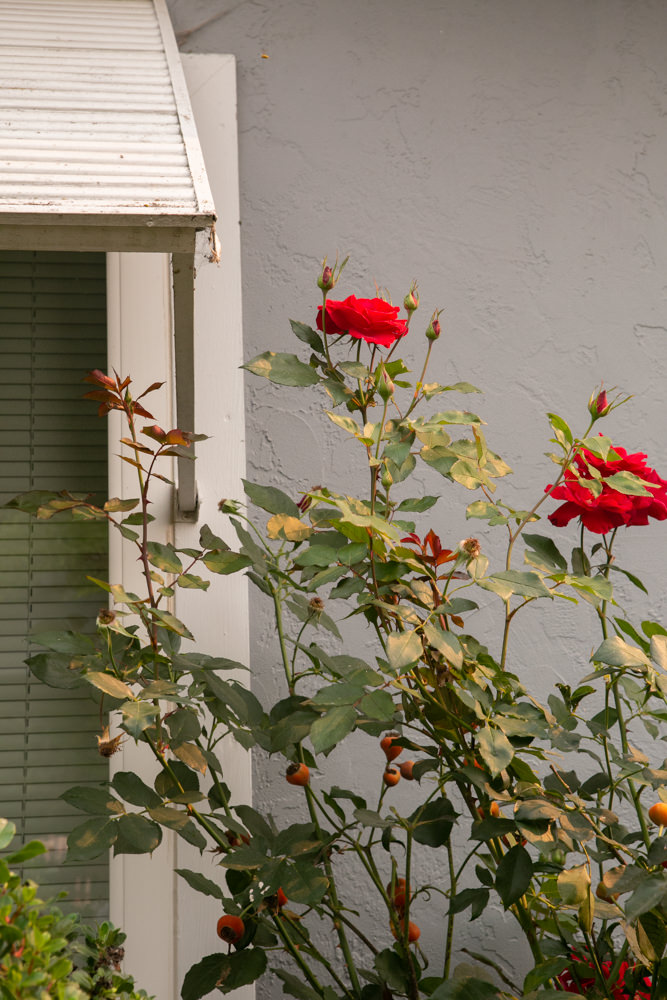 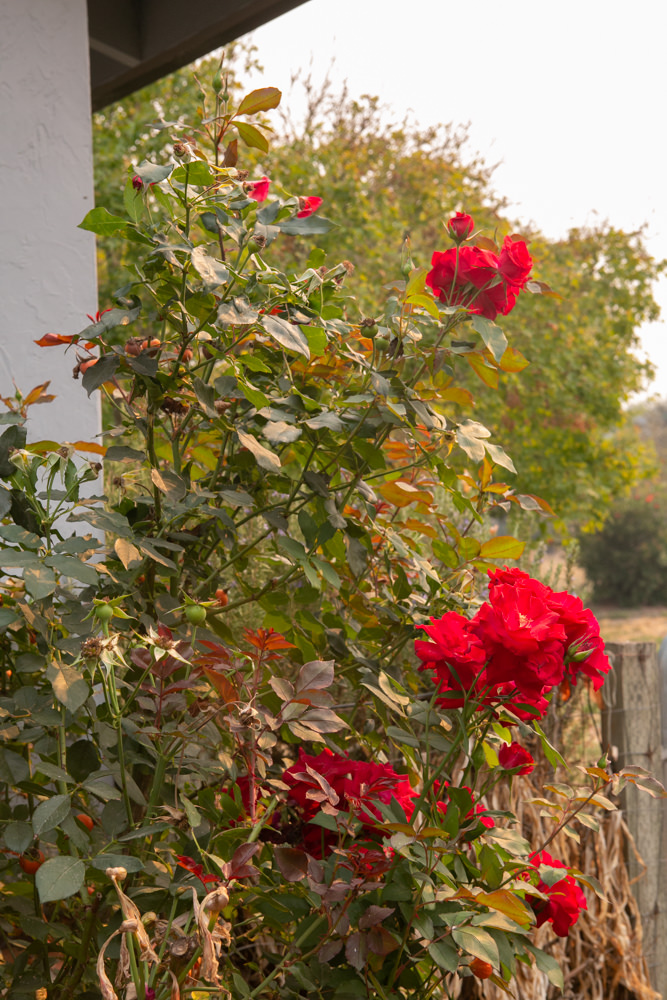 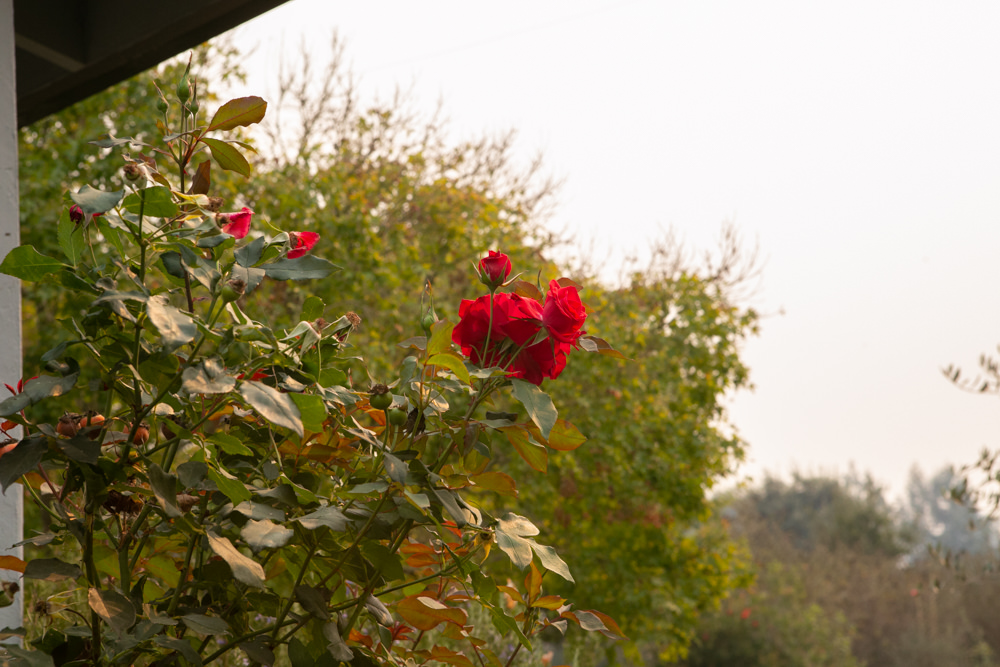 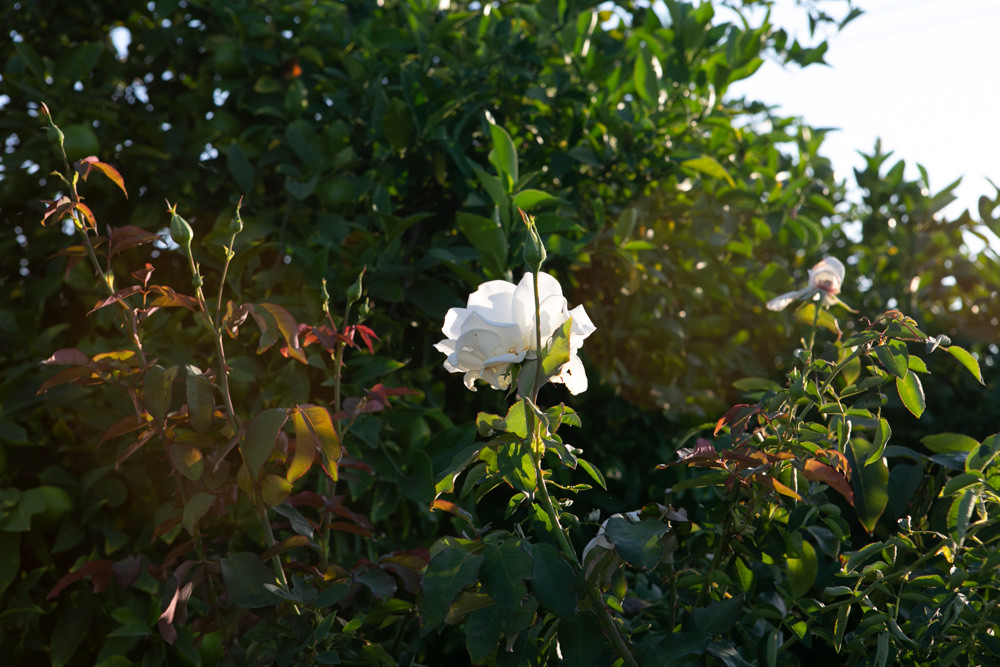 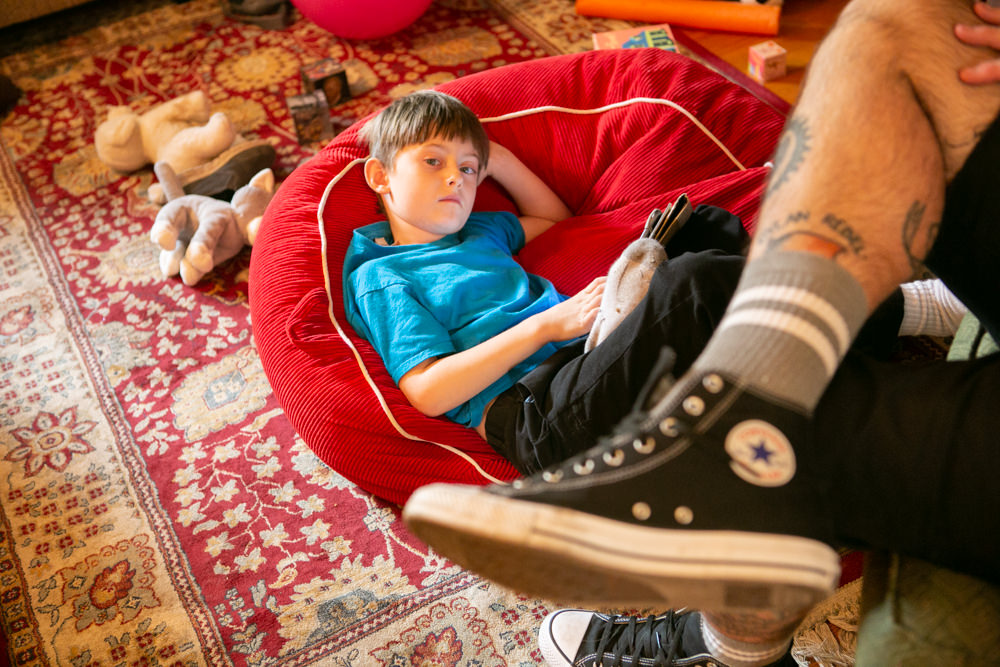 We had friends and family who left Santa Rosa with no solid plan come join us at my parents’ house, where we all tried to nap, keep the kids calm, forage for food in the cupboards, zone out with tv, and scroll social media endlessly to try to figure out what was happening – what was burned and what was safe.  I saw pictures of buildings that had burned to the ground – and other pictures that implied we’d lost a lot more Santa Rosa institutions like the Luther Burbank Center – which thankfully ended up mostly intact. 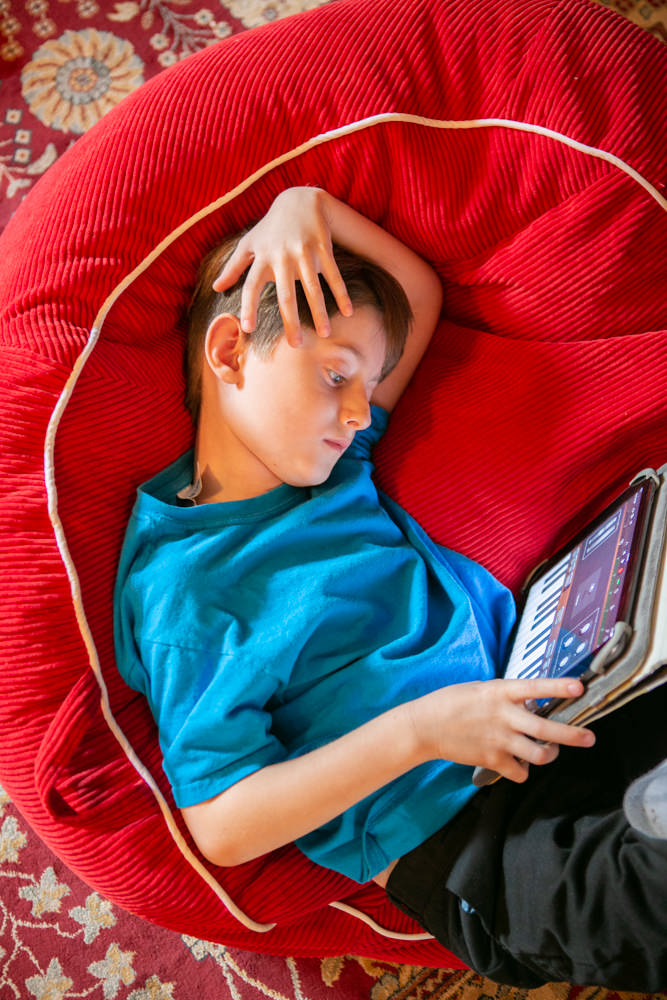 The kids were mostly excited to be together, to be out of school, to be getting free reign of screen time! – but also cooped up, overwhelmed, shrinking away from snappish, exhausted and anxious adults whose nerves were ground down to nothing by afternoon.  It also felt wrong to have left Devon at our house (to keep watch on the kitties and our home), and I had to keep reminding/ promising myself that he was safe. 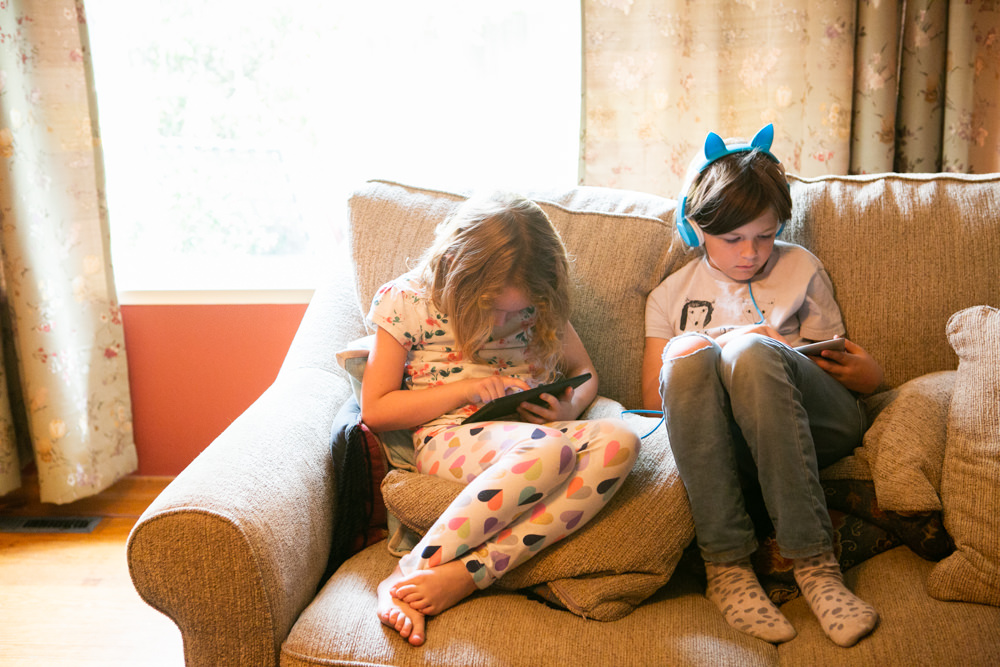 The next three weeks were some of the most surreal days I’ve ever experienced!  The kids were out of school for THREE weeks, so even amidst the chaos and uncertainty, Symphony was pretty stoked 😉 as she got a ton of time to watch tv and play with friends.  Probably half of our friends left town, to all directions (most having to go hundreds of miles to actually get away from the smoke).  I tried to catch up on my photo editing, but kept having to interrupt my work in order to pack up my computers and hard drives as the wind changed and the fires continued – they weren’t contained at all for weeks.  I shot the most beautiful wedding on Friday 10/13th, with the ceremony (of mostly shell-shocked Sonoma County guests) at SF City Hall, where the air, even there, was tinged with the smoke that stank of the destruction of thousands of homes and all of their contents – and then the reception, out in Inverness, at a location so clear and blue that I had to pull over to gulp it in and cry that my city (so close but so far away) was drowning in the most noxious smoke.   I could go on and on – from the realization that hundreds of inmate firefighters were stationed right around the corner from our house, where I could see them but not give them our community’s gratitude the way that we could non-incarcerated firefighters (who were getting grateful, tearful hugs and profuse thank yous, as well as delicious gourmet meals, beer and wine, all over town).  My friends who stepped up to donate countless hours of health care, massages and herbal lung support.  The fear we all had that the two newest of our city’s three hospitals would burn down.  How my daughter’s school’s crossing guard lost everything when his house burned, but didn’t really seem to care, because his family was safe, and his sons helped rescue neighbors in their Coffey Park neighborhood – and how I asked for donations for him, and ended up with over $500 in gift cards to support his family.  How many different cities I saw represented on one after the other of the hundreds of fire trucks from all over the west coast, and how they brought me to tears every time. 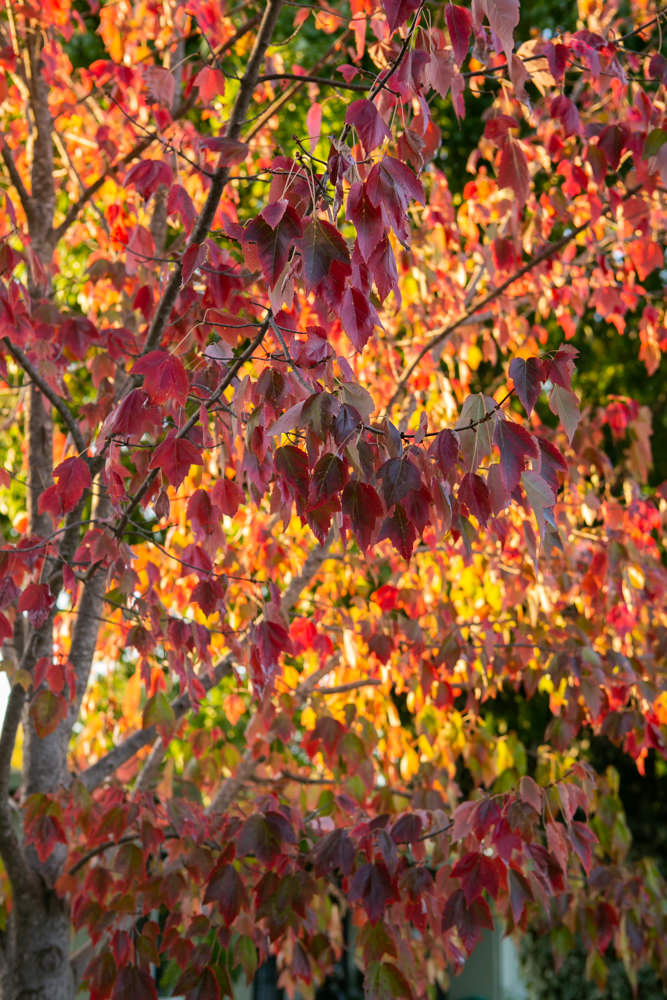 I feel a little self-indulgent, sharing this from my perspective, when we didn’t lose our home, our lives, or our family – and I can’t imagine the terrifying, tragic experiences of thousands in our community.  But writing it out helps me come to terms with that weird month, and I feel a need to help…  commemorate it, to find closure.  It was a reminder of how tiny AND huge our city, our country, our world is.  And, while I am so, so relieved to not be in October 2017 anymore, there was also something beautiful (at least from the easy outside where my family was lucky enough to be) about the community pulling together, about focusing ONLY on what’s important (our kids’ safety, taking care of each other, love) and letting any and all non-essentials fall away.  I realize that it’s so easy for me to say, not having had to live through the hell that so many people here did.  But getting, and giving, messages of “I love you; be safe” on that hellish morning was a reminder of what’s really important, and how little of the stuff that makes up our daily lives even matters. 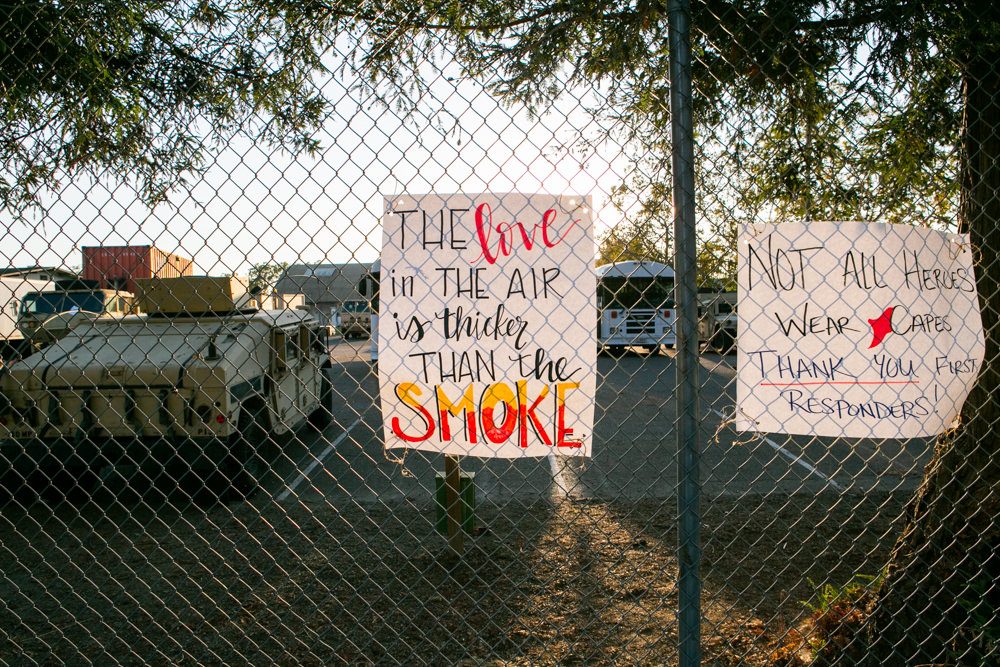 And even though the fires are long out, the impact of losing over 2,000 homes in Santa Rosa (and over 5,000 in the North Bay) last year, when housing costs were already insane, rents disgustingly high, and buying a home an impossibility, BEFORE the fires – there’s no way to overstate how hard this has hit our friends and family who rent here in Santa Rosa/ Sonoma County.  I don’t know where my family would be if we hadn’t bought exactly when we did, ten years ago this month – but I don’t have to look far, as we’ve seen DOZENS of people we know leave Sonoma County in the last year.  Each week brings more good-bye parties and friends leaving, and it’s breaking my heart, and breaking our community, for sure.  A rent control measure was defeated just months before the fires, mostly because of big money donated from organizations located outside of Santa Rosa, and our housing situation is nearly as untenable now as the Bay Area’s, but without the same job opportunities.  It is a mess, and a disaster long after the immediacy of the fires has passed. 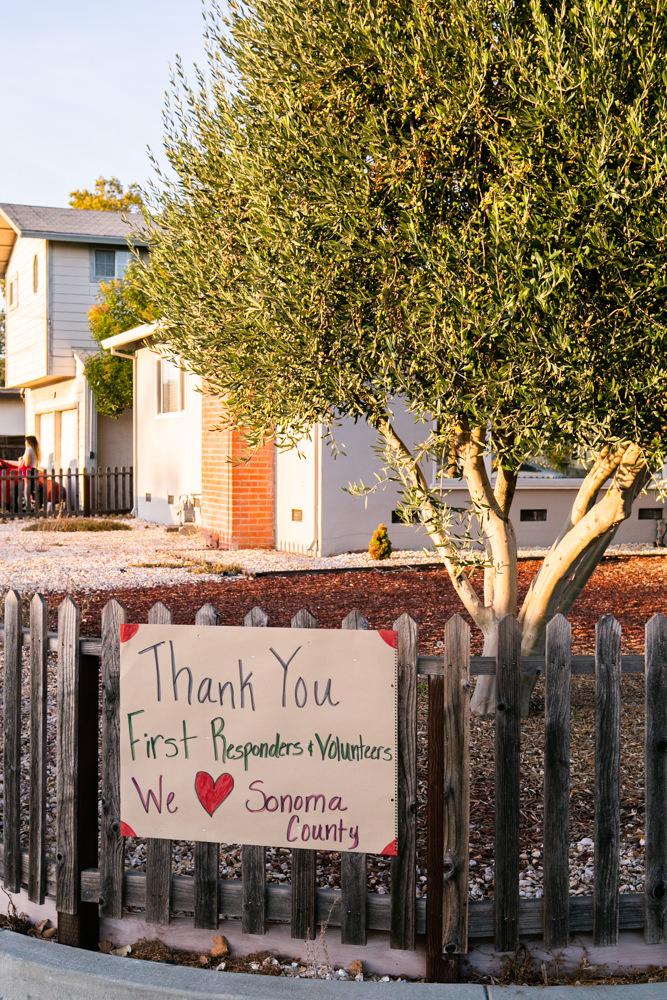 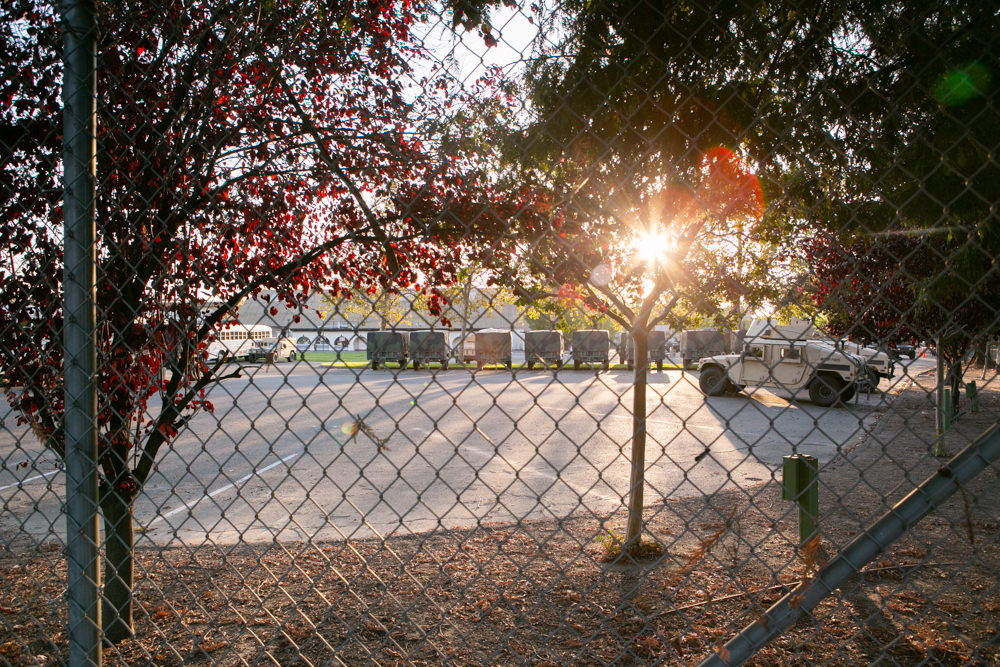 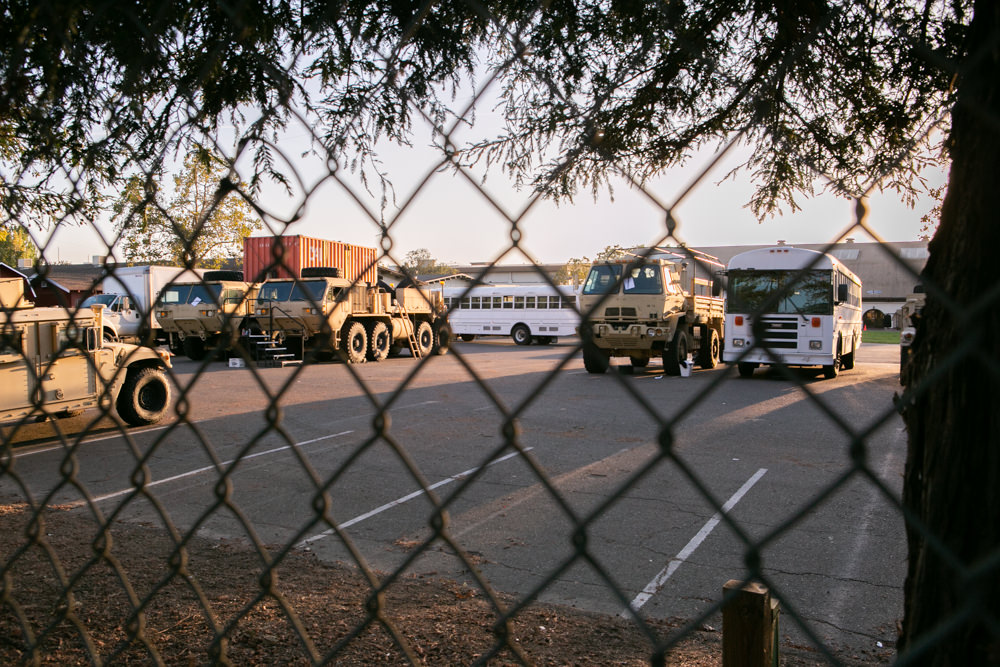 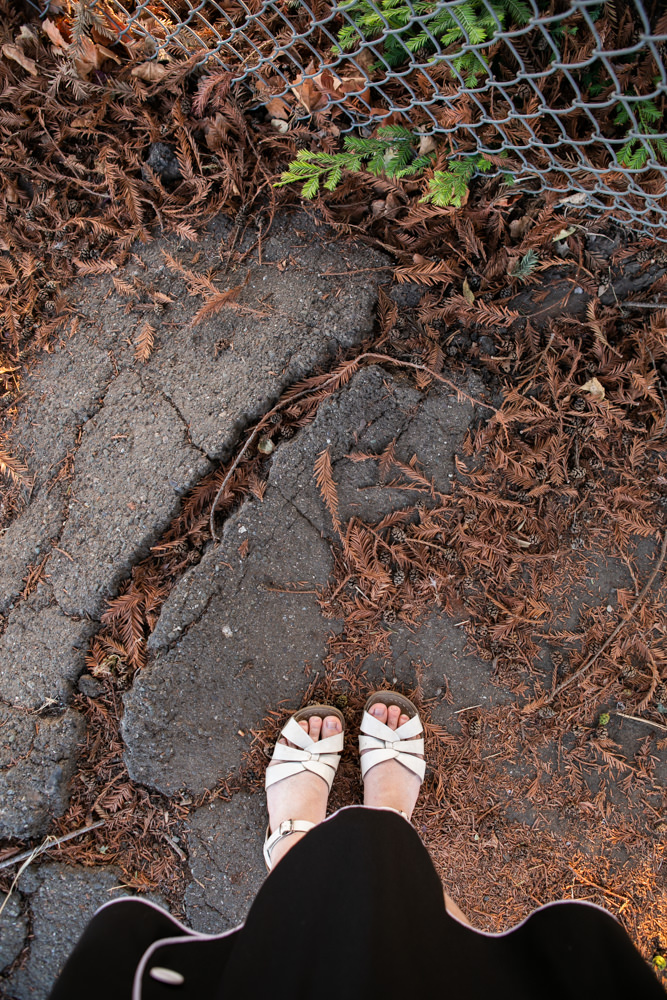 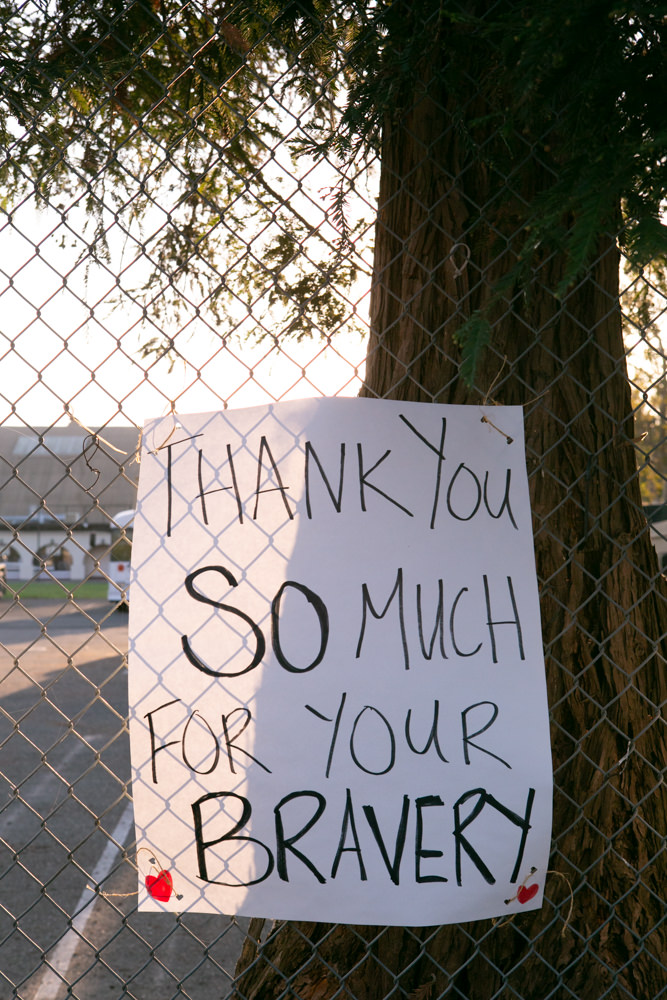 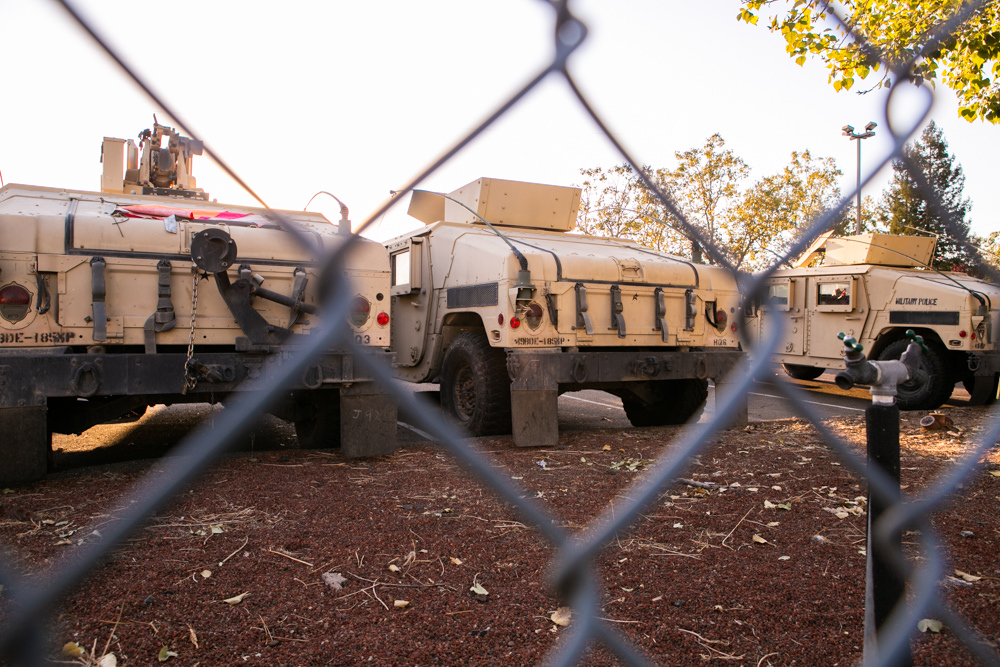 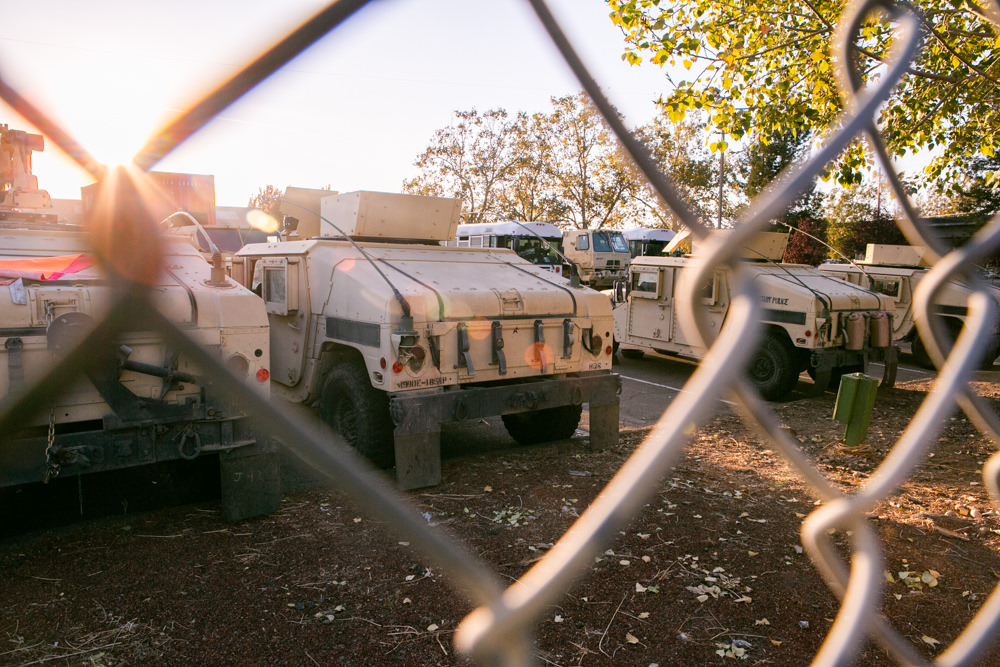 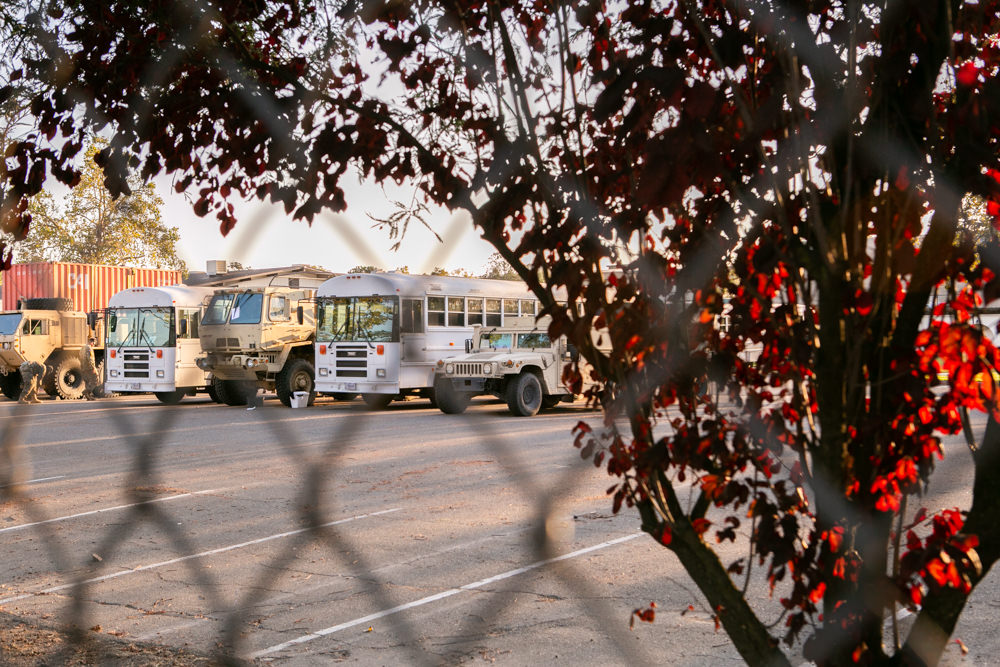 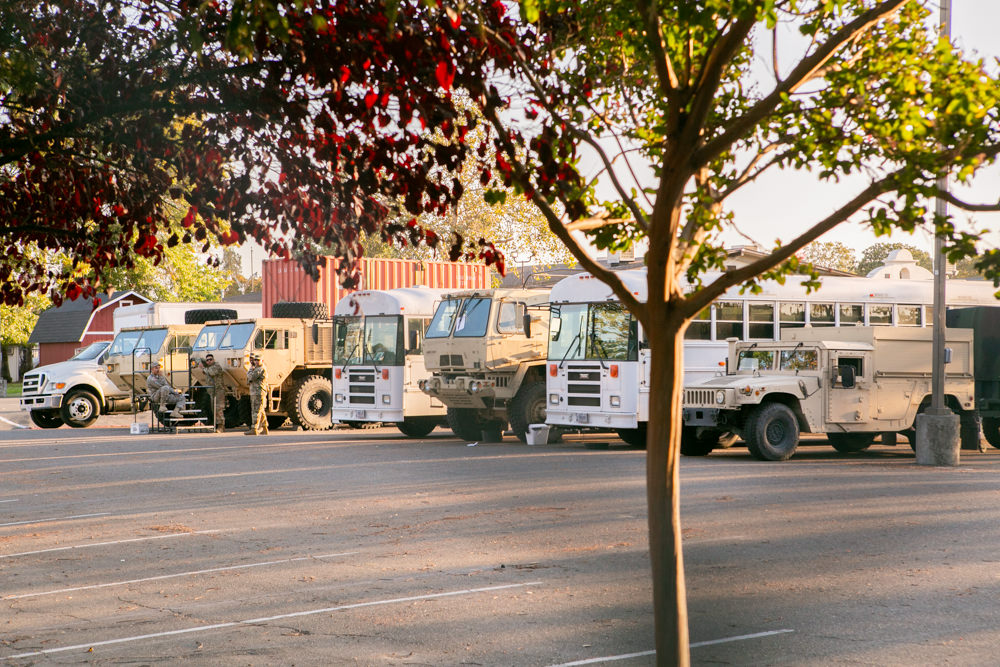 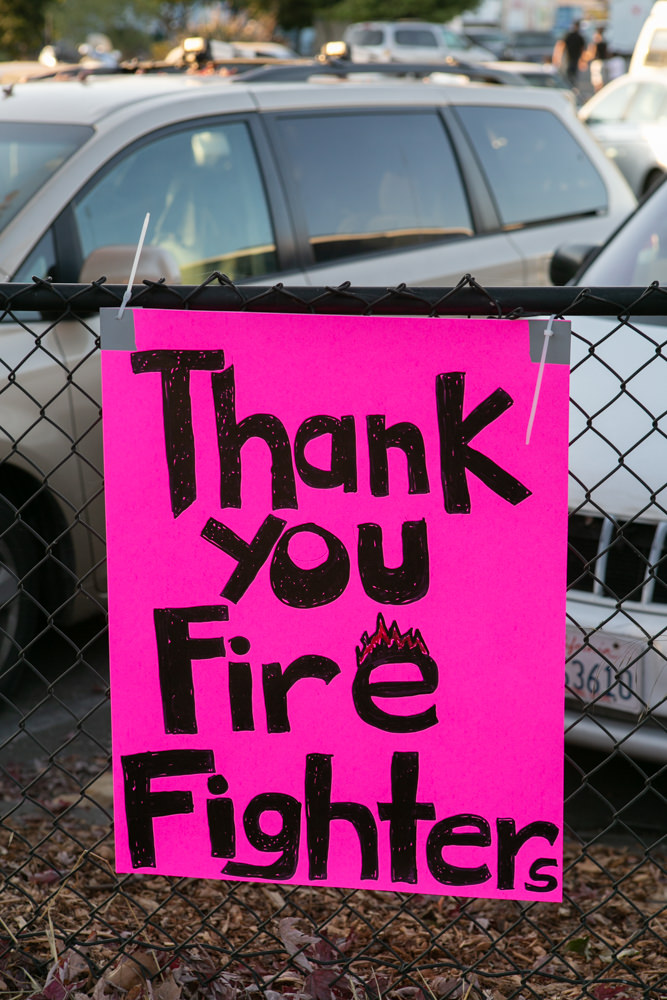 I don’t have a succinct, summing-up message to end with.  It was a hard, weird, devastating, unifying and beautiful time.  For an upcoming 3rd grade history project, Symphony has to interview someone who’s lived through a historic event, and she rightly said, “I could interview myself! – the fires last year were an historic event, right?”